Now that I have a blog, I figured I could start posting more info about our travels. So here’s a little digest from one of our recent trips. I’m hoping it will be useful to other tourists looking to visit Gran Canaria, especially in the same season we went (February). 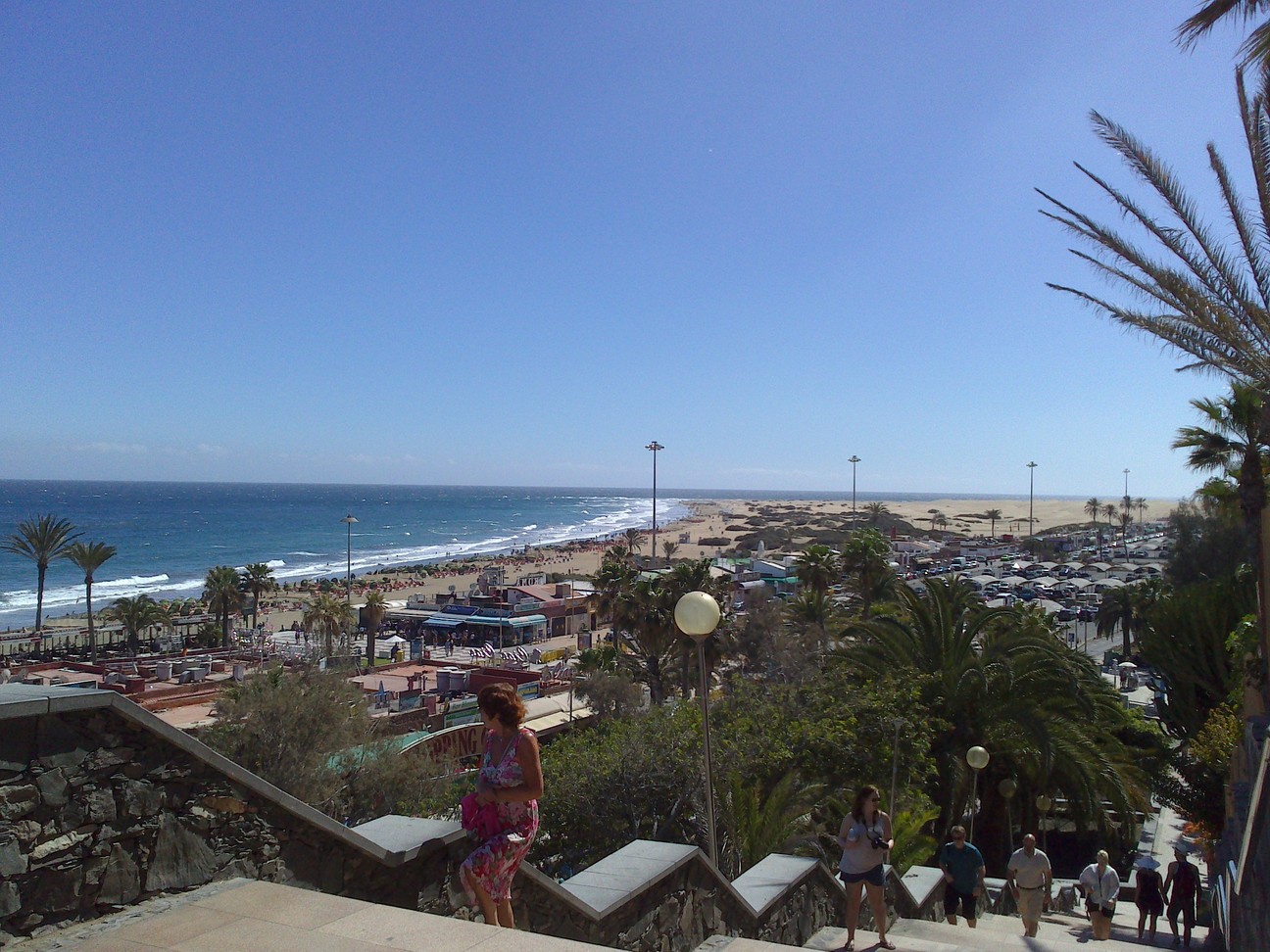 When I say we, I mean me and my wife. As an IT freelancer, I can work from wherever, so our holidays are governed entirely by my wife’s work schedule. Oana got a week off in late February 2014 and we decided to take a break somewhere warm(ish).

Firstly, it’s not particularly hot in Gran Canaria in the winter.

Canaries are also called the “islands of eternal spring”, but February is still the coldest month, with temperatures around 24°C in the sun. Shorts/short sleeves are fine during the day, but for trips to the mountains (see below) or late evening strolls, definitely pack something warmer too. I had googled around before we left, so this didn’t take us by surprise. 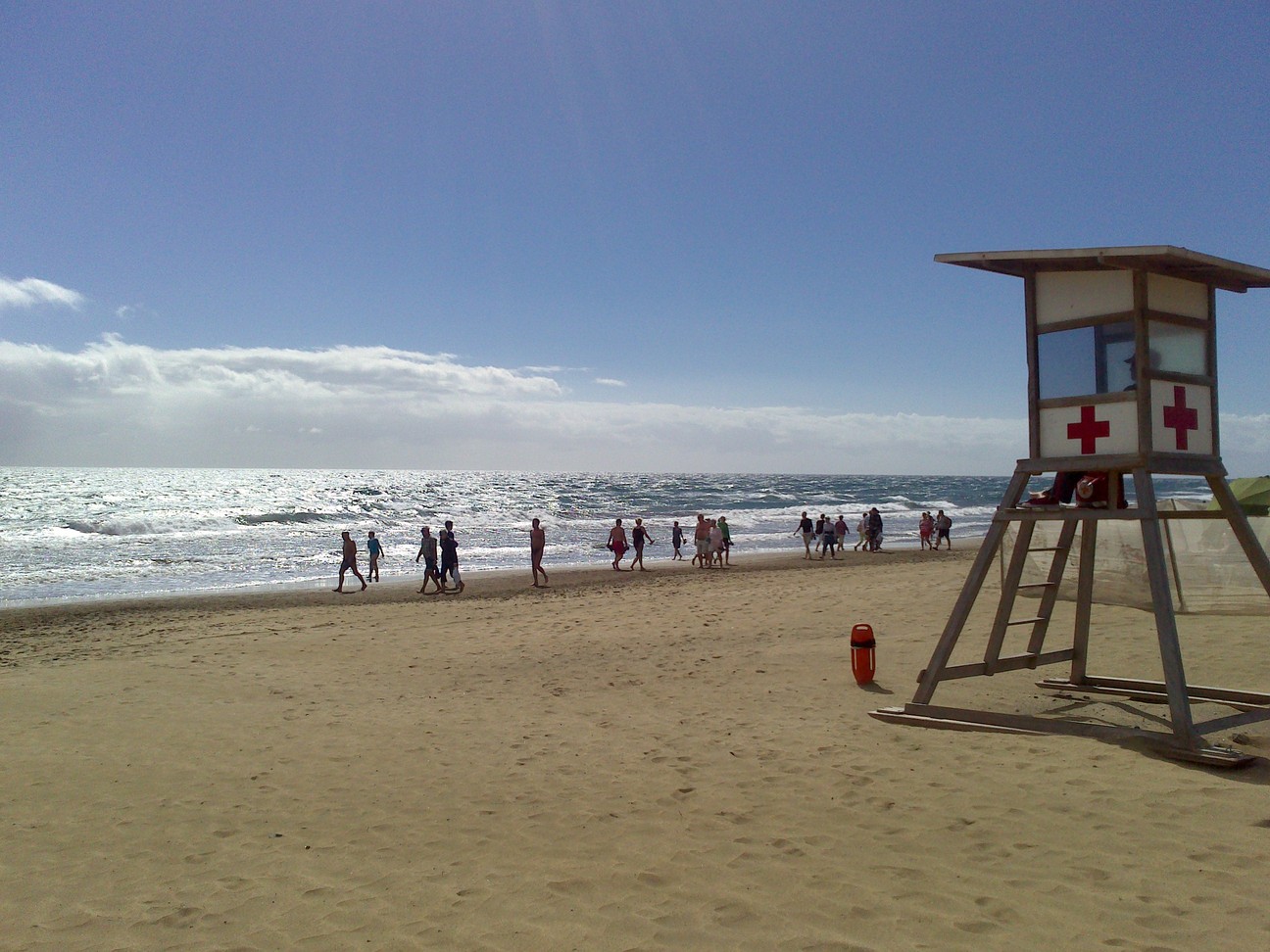 Note the lack of people frolicking in the waves.

My wife needed an online connection to work on her PGCE course, so I inquired about the local internet options. After asking around I bought a local SIM card with a reasonable data limit, from a company called Yoigo. It’s an acceptable 20 Euros for 2.4GB.

The truth is, we’re both internet addicts so her work was just a convenient excuse. We ended up watching an entire season of House of Cards in Gran Canaria, two episodes per night. I had to top up the SIM again on Friday… how sad is that, for a tropical holiday?

I rented a bike near the place where we lived (which I can only recommend: the shop’s called motoandbike.com, we went for the Yamada XMAX 125cc). 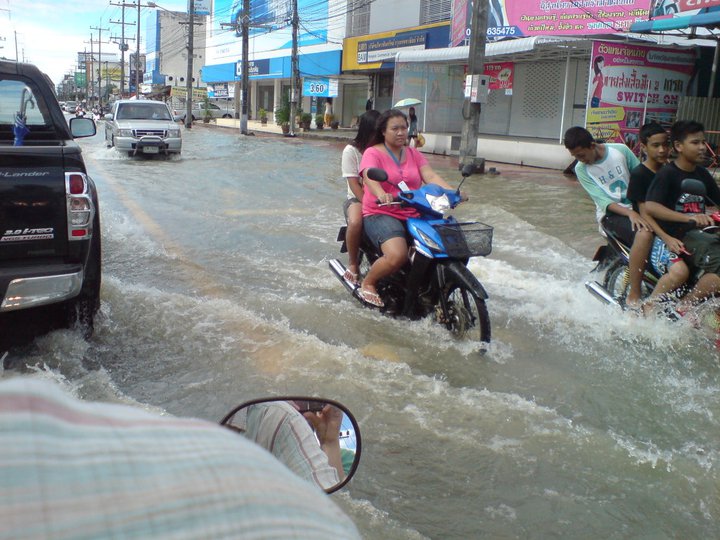 Riding the scooter brought back fond memories of our life in Thailand, including our amphibious expeditions during the Thai flood season.

We booked an all-inclusive stay in Riu Waikiki, a member of the Riu chain that is omnipresent on the island. We saw Rius everywhere: there was Riu Flamingo right next to our Rio Waikiki, then Riu Papayas about 200m down the road, Riu Maspalomas at the beach. We went to see the light house, to find Riu Meloneras and Riu Oasis right next to each other there. Spooky. Reminded me of an old communist joke: “I open the morning paper – Lenin. Open (switch on) the radio – Lenin. Open TV – Lenin. Afraid to open a can of sardines now!”. 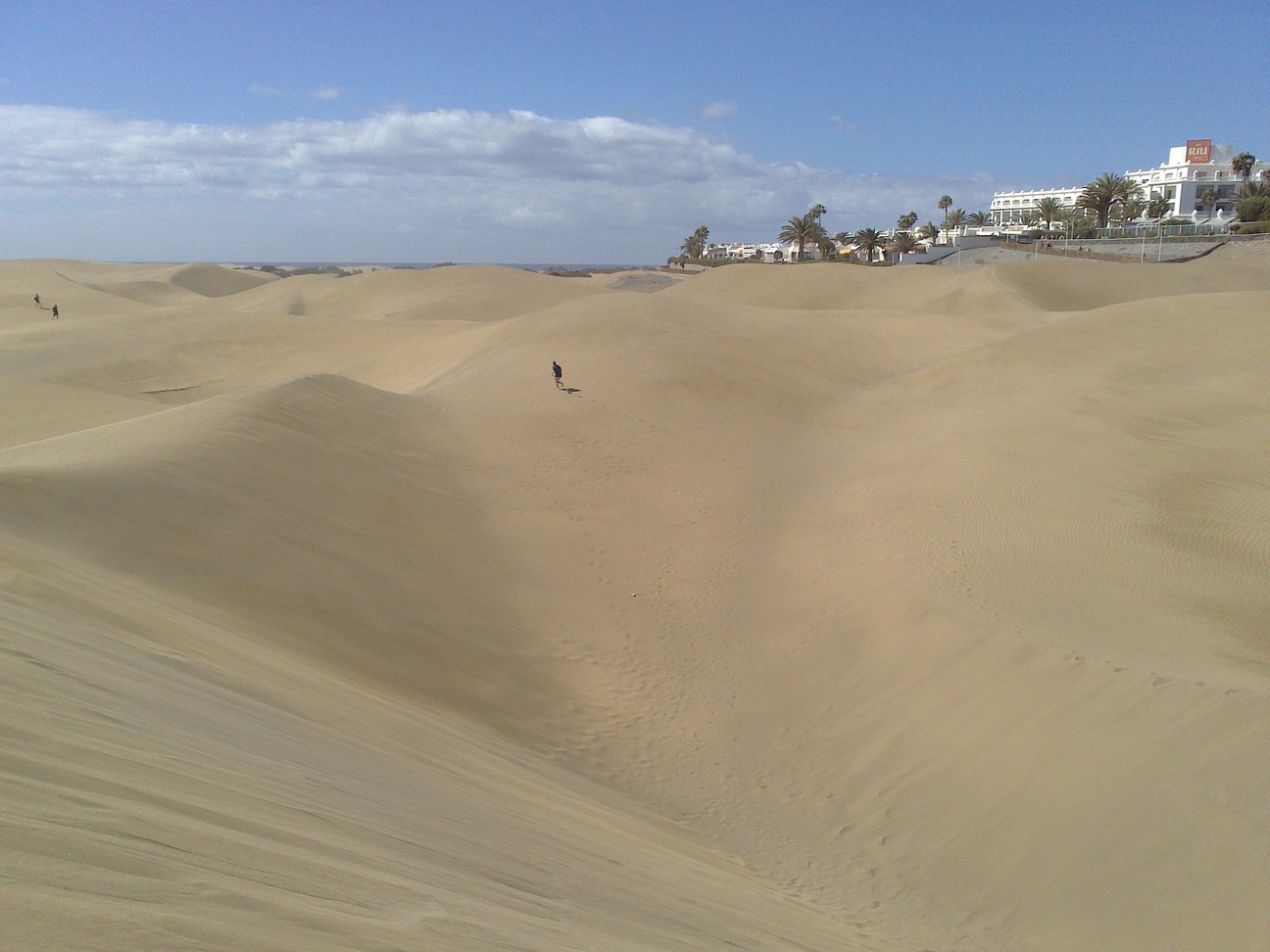 Maspalomas dunes. In the background: a Riu hotel…

The hotel quality was fine, no issues. I asked for a quiet room, wife enjoyed hotel’s animation activities in the morning. I know people rent bungalows or timeshares here too, but I didn’t really look into it. We simply went for a last minute, all-inclusive hotel package. 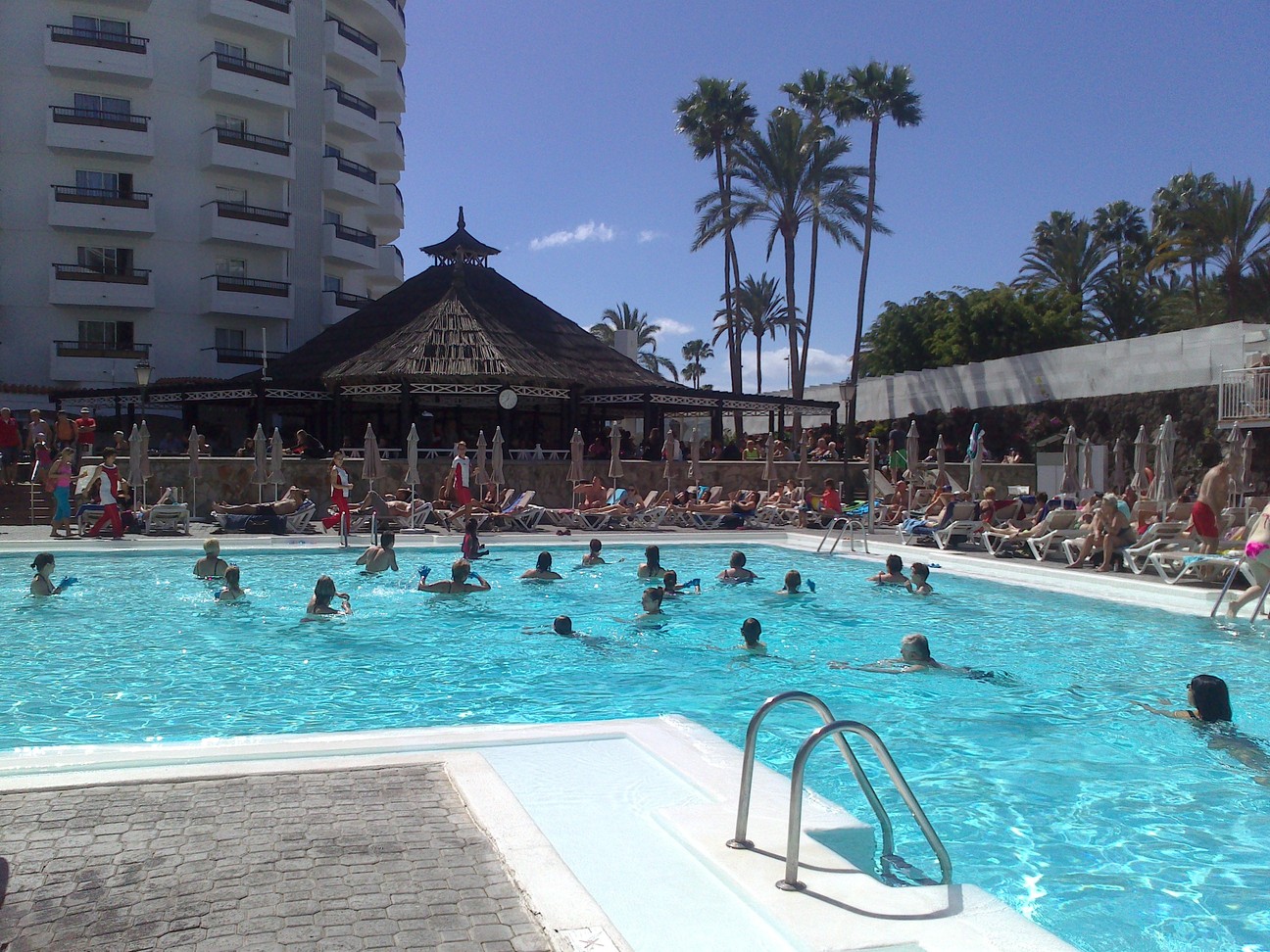 We only stayed for a week so I can’t claim any expertise, but the dunes of Maspalomas were as amazing as advertised. 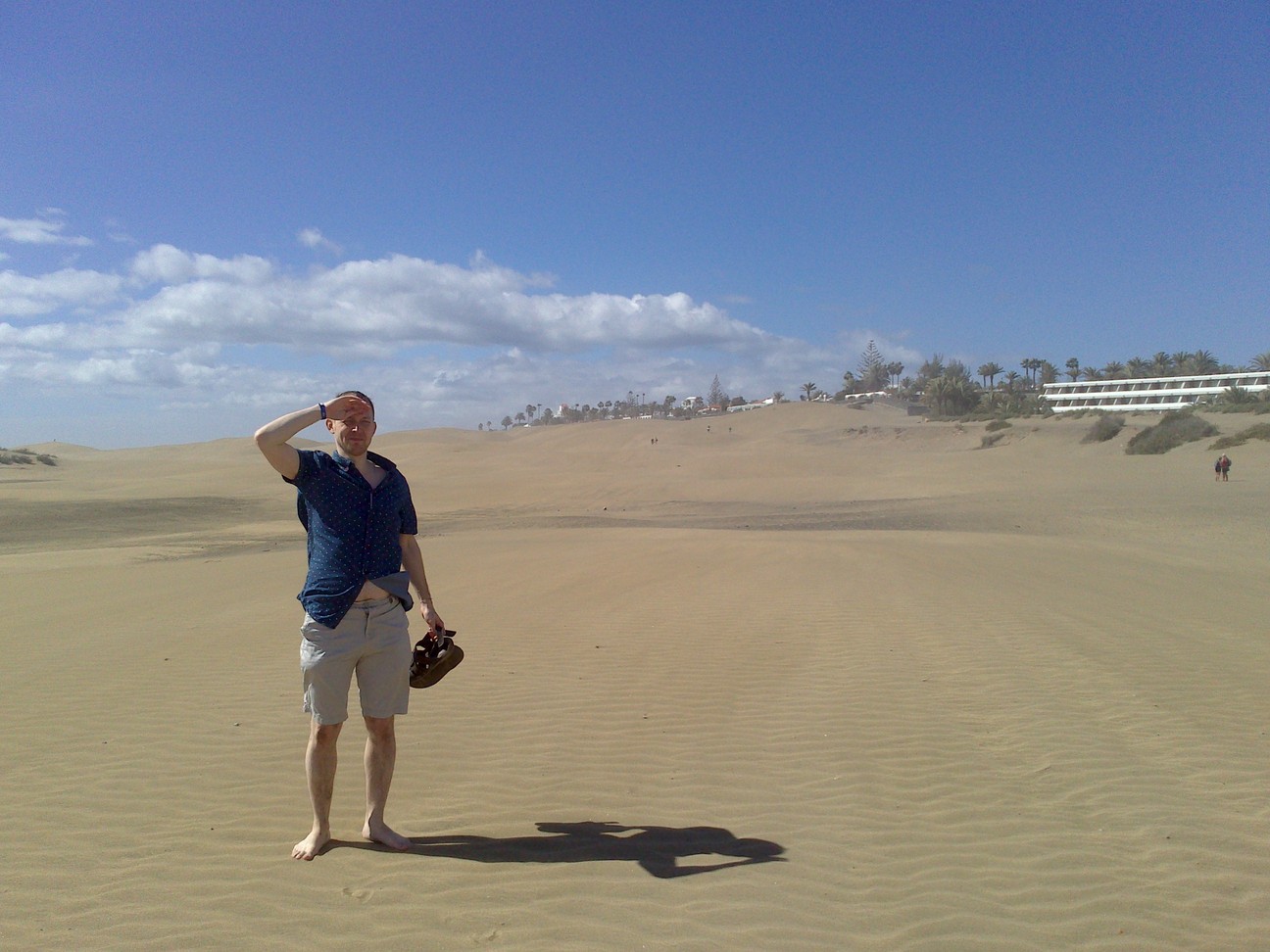 I’m not saluting you, I’m shielding my eyes from the goddam sand.

During our travels around the world, we noticed rich Western tourists will pay for any random bullshit (“Aillwee Bear Cave” in Ireland, bah!), but the Maspalomas dunes were pretty cool. We lived just around the corner, at Playa del Ingles, and ended up going to the Maspalomas beach almost every evening, for the beautiful sunsets and the desert “sand everywhere” experience.

Like all Canaries, Gran Canaria is a tiny volcanic island, rising steeply from sea level to the craggy peaks in the island’s centre.

With promises of beautiful ocean vistas and picturesque serpentine roads, we went for a day trip. The landscape delivered and it was a lovely sunny day, but I underestimated the difference in elevation (almost 2km as I later learned: the highest peak in my home country is just 1.6km, never mind going there from the sea level!). We only took light jumpers, and subsequently froze our asses off. Wife especially wasn’t pleased with my planning. 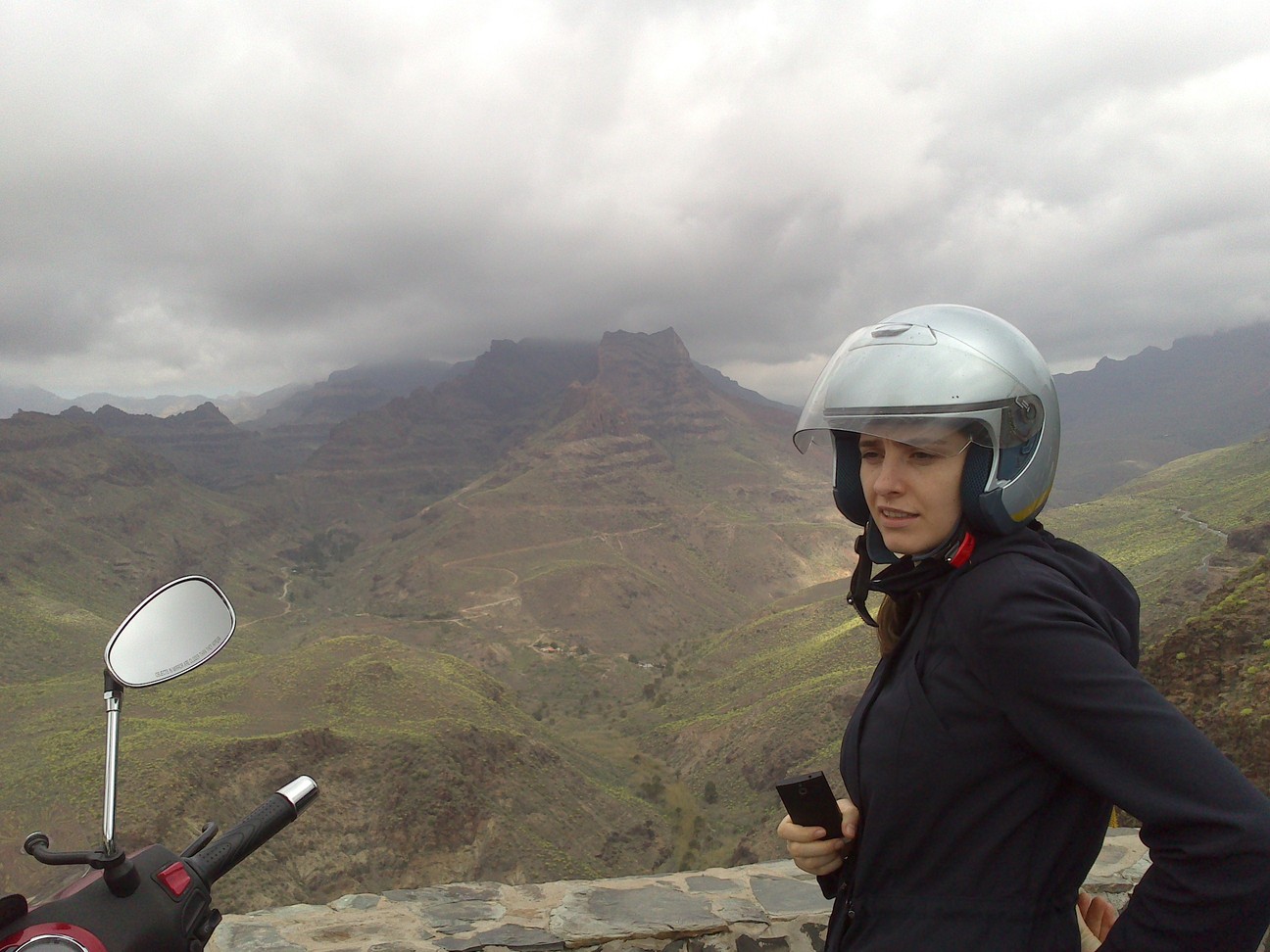 Nevertheless, our tour around the island was probably the best part of our stay. It reminded me how much I miss our random Thai bike trips to obscure waterfalls and beaches, with nothing but sun and wind and my wife (girlfriend, back then) riding pillion. Prague is not like that.

On our last day, we went to Las Palmas, the cultural centre and capital of Gran Canaria. Here we spent some time walking around the city and visiting museums. The most impressive one was Casa de Colón, aka the “House of Columbus”.

Gran Canaria used to be an important stopover in the Age of Discovery. All the great voyagers paused here to replenish supplies, repair ships and generally chill, before continuing on their epic expeditions and conquests in Africa, Americas and elsewhere. 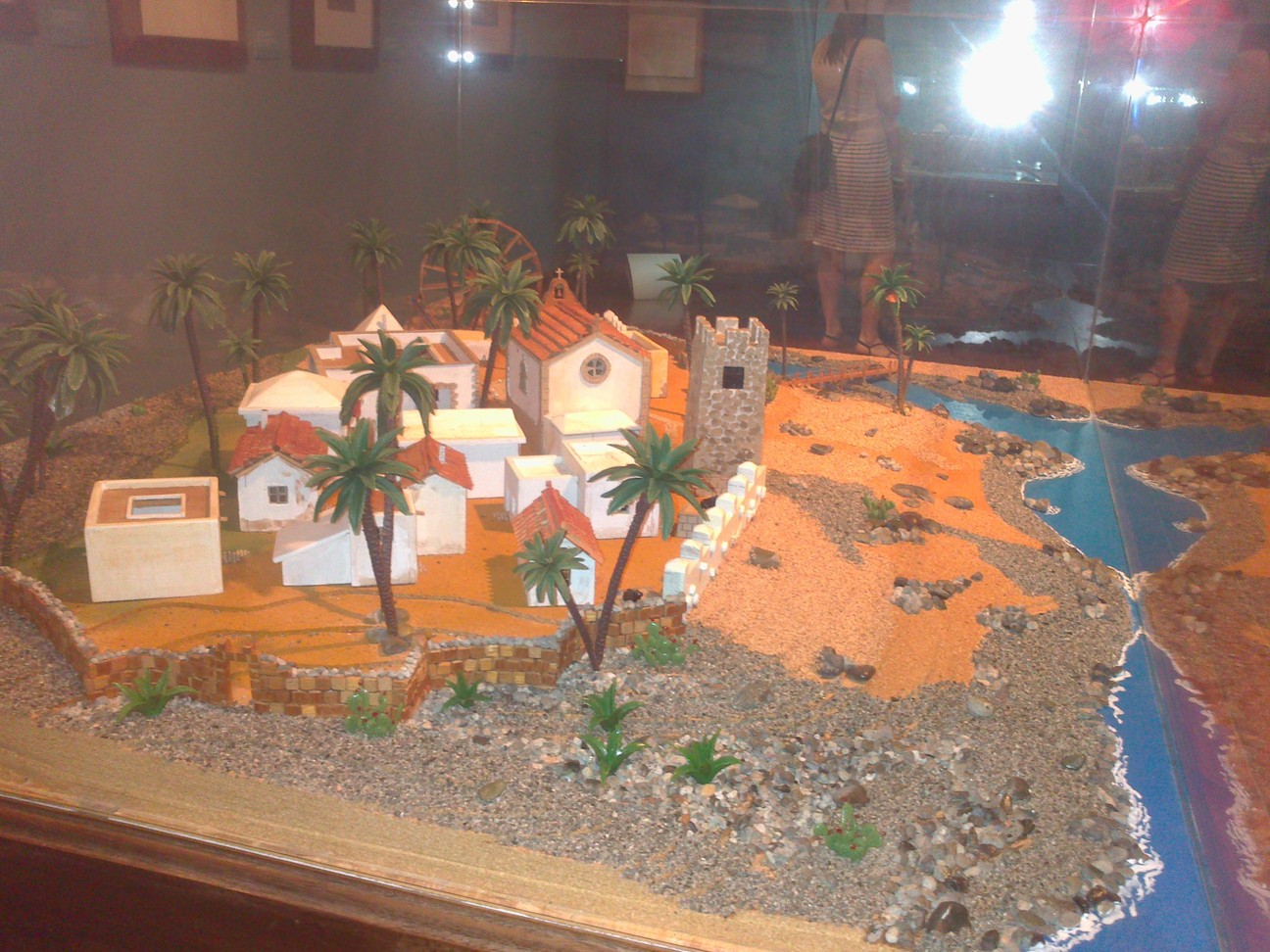 The entire “Las Palmas the capital”, circa Columbus time.

The House of Columbus museum is full of various maritime artifacts and tidbits from that age. There are day-by-day maps of progress of the voyages, including wind speeds, Columbus’ personal journals and logs, royal letters and insignia, items brought back (=stolen) from the native American civilizations… 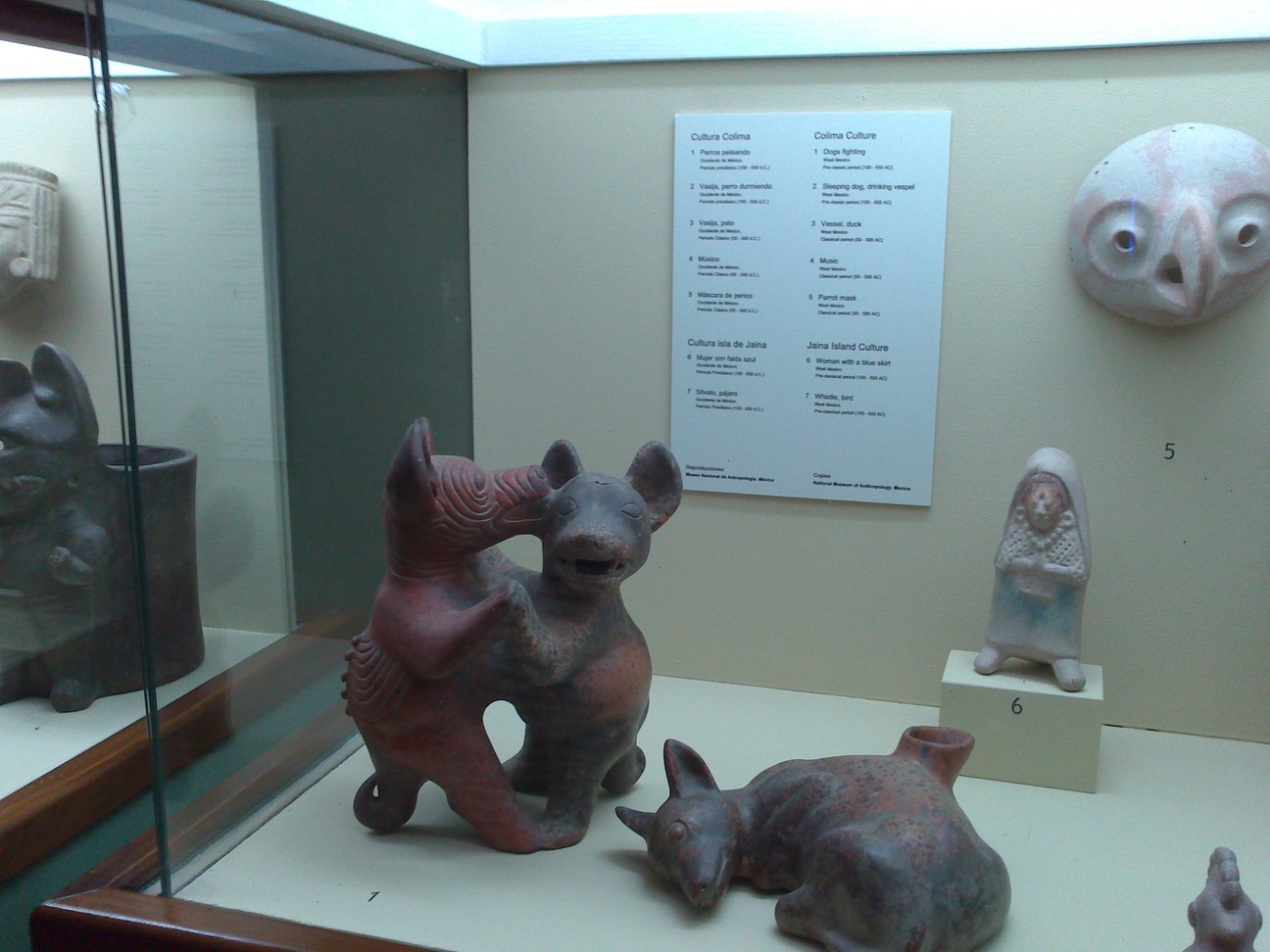 Exploration and navigation were all the rage back then, and there are many fascinating maps in the House. Including a copy of an ancient map by Ptolemy (a Greek/Roman scholar, 2nd century AD), which already correctly depicts Earth as spherical. Other treasures include an ancient astrolabe, the famous medieval Catalan atlas from the 14th century. It all seems like a fairy tale, yet took place only a few centuries ago! 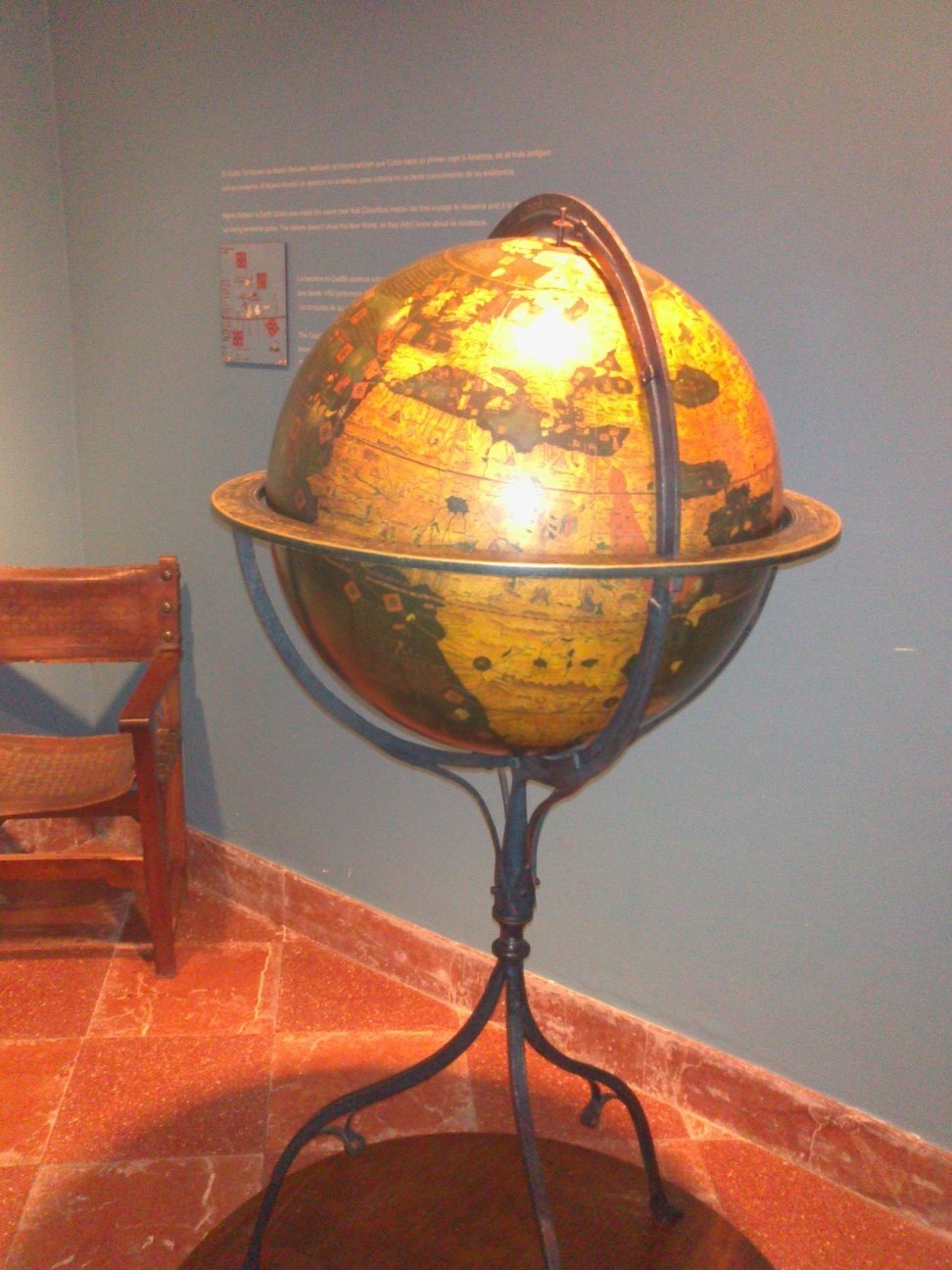 The first globe ever, created in 1492, the same year Columbus made his famous voyage. Consequently, the only globe ever NOT to include the Americas.

I know I said earlier that the bike trip was the best part, but now that I write these lines, the nerd in me begs to differ. Going through these ancient maps and artifacts, comparing the knowledge of our (fairly recent, really!) ancestors to our own, seeing the scientific progress and human struggle and aspirations throughout time, fills me with awe reliably. 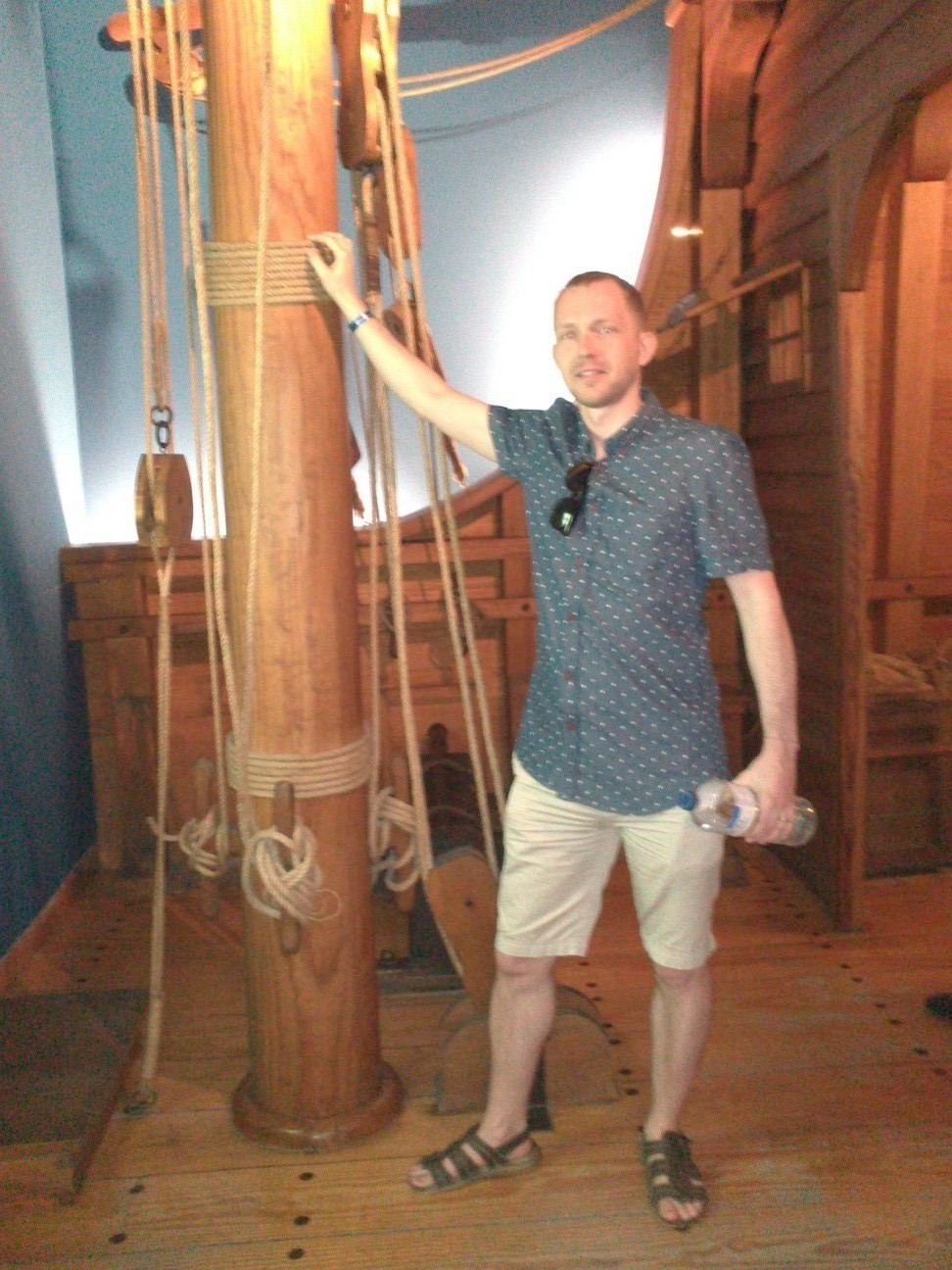 For someone who grew up on romantic adventure books of the Age of Discovery, this was paradise.

We had originally planned to see the famous Las Canteras beach to the north of Las Palmas, supposedly the most spectacular beach of the entire island, but in the end spent too much time in Casa de Colón and had to head back south to our hotel. We took a bus home, happy with that (otherwise cloudy and cold) last day of our stay.

The windy “sand ghosts” in the dunes of Maspalomas.

The hotel lift saying “parchante” (“you bastard!” in Czech), every time we exit. My latin wife insists it’s actually “bajando”, Spanish for “going down”, but I prefer the Czech interpretation. Nothing lights up your day like a spirited insult coming from an elevator!

Khaled Hosseini. I packed his “And the Mountains Echoed”, finished it on day one. A brilliant book, marginally peppier than his previous work (not a very high bar arguably).

With wife snubbing me because of her work, I could finally write the piece for Ian’s upcoming book on High Performance Python that I had promised him.

In case anyone’s interested in expenses from a touristy point of view, here’s our tally:

I’m writing this in hopes someone will find the information useful when planning their own trip. If you have any specific questions, feel free to ask in the comments.